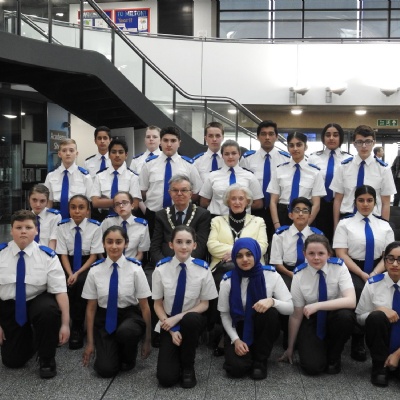 On Wednesday 28th March, 23 new recruits attended the Peterborough Volunteer Police Cadet Pass Out Parade, hosted by Thomas Deacon Academy. Family, friends and special guests gathered in the atrium to enjoy the third Passing Out Parade since the establishment of the Peterborough unit in 2015.

Following the opening of proceedings, TDA Principal, Mr Walls, welcomed family and friends and spoke of his pride in the Peterborough police cadet section and the positive behaviour being modelled by students from across the city.

Mr Walls said, ‘It was a privilege to watch the group of Volunteer Police Cadets at their Pass Out Parade tonight.  We are confident they will continue to serve the community outside of school and continue to be amazing young ambassadors of which we are very proud’.

Under the instruction of PCSO Latimer, the Cadets paraded into the atrium to the take their Police Cadet Oath before receiving a uniform inspection by Deputy Mayor, Cllr Chris Ash and Deputy Mayoress, Doreen Roberts. Once confirmed as suitably presented, the Cadets were presented with certificates and welcomed into the policing family by Detective Chief Inspector, Jon McAdam.

DCI McAdam said, ‘We are proud to have passed out a further 23 Volunteer Police Cadets and welcome them into the policing family. The cadets have worked hard to get to this point and will now progress to support their local communities through voluntary work, charity work and being a positive role model to others’.

The 23 new recruits will now join the existing 25 cadets in the Peterborough section for a summer of volunteering and working in the community.