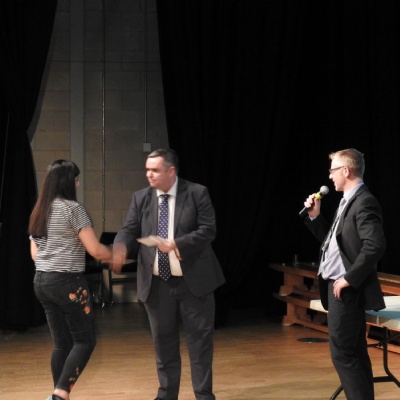 Early December, TDA hosted the 10th Duke of Edinburgh Award evening since opening as an Academy and, in addition to celebrating the achievements of the 2016/17 cohort, the Academy also celebrated reaching the milestone of 500 students completing the scheme since 2007.

This year, 88 students accepted their awards, with a further 12 awaiting sign off from the Local Authority, making 2017 the most successful year in terms of the number of students completing the award.

Mr Walls, The Mayor, John Fox and special guest Steve Cook addressed the audience before presenting the students with their bronze, silver and gold awards and to mark the 500th award, Aleema Ayyaz was presented with a gift from the Academy.

The Duke of Edinburgh Scheme continues to be one of the highlights of the TDA calendar and we are very proud of the achievements of our students and the staff that support the scheme.