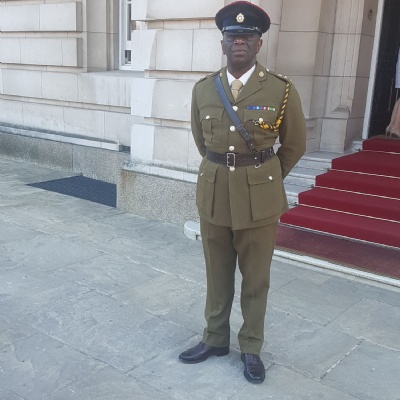 After receiving an official invitation to the Queen’s Garden Party, Lieutenant Colonel Chris Thompson escorted his wife to Buckingham Palace as a special guest for his work with the CCF Association.  Lt/Col Thompson tells us about his experience,

I was required to attend the Garden Party in full service dress and given that I was in military uniform we were allowed to go to the front of the very long queue of people outside of Buckingham Palace.

After entering the grounds of the Palace we went into the inner courtyard, through the anti-room and onto the veranda where we were advised that, upon hearing the National Anthem, her Majesty would arrive.

We stood waiting on the lawn of the Palace and right on cue her Majesty arrived. There was a lot of excitement with over 7000 people waiting for her arrival.  The Queen walked through the crowds with her ladies in waiting, stopping to speak to select members of the public who had done outstanding work for her charities.

After about an hour, the Queen retreated into the Royal tent for tea and at that point we decided to take afternoon tea ourselves.  The service was like a military operation and we were very quickly sat enjoying our refreshments. Following afternoon tea, we walked around the grounds while we waited for Her Majesty to retire back to the Palace, before leaving ourselves.

It was a fantastic occasion because I represented the Combined Cadet Force Association, of which I am a Trustee and, most importantly, I was able to represent Thomas Deacon Education Trust.