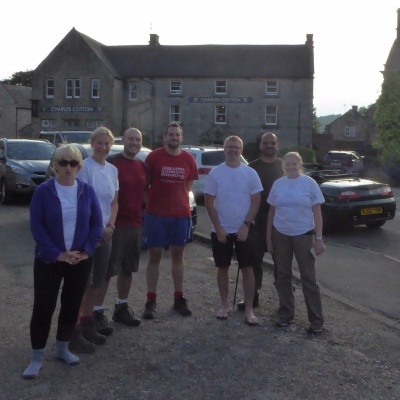 In continuation of the ten year celebrations, the month of June celebrates the delivery of the Duke of Edinburgh Award Scheme at Thomas Deacon Academy.

Alongside the monthly pop-up gallery and a new initiative to give year 8 students taster sessions, preparing them for their Bronze Award in Year 9, the D of E staff team signed up to take on the Six Dales Challenge in the Peak District.

Saturday 9th June saw the team set off at 7.30am for the 26 mile hike across the Dales. It was a bright morning, that looked promising for the challenge ahead. After five hours of hiking the team had reached the half-way point at Monyash, having completed three of the six dales.

After a quick rest and bite to eat, the team continued on with their challenge and after 9 hours 53 minutes the first of the team members had completed the circular route to find themselves back at the minibus.

This was a tough challenge, that took determination and willpower. Well done to everyone that took part, not only for completing the challenge but also for raising money for Bloodwise.