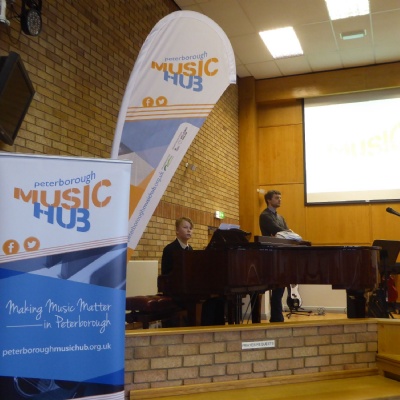 The project involved each school composing a musical piece based on the theme of origins and journeys. TDA focussed on the diversity of the Academy community and how everyone has been brought together in our city, Peterborough.

The group of musicians took on different roles in the band to deliver a performance with a strong rhythmic drum beat and the orchestral sound of violins and piano, supporting the vocalists. The composition delivered a tribal feel that celebrated the countries represented within the band.

In addition to the individual school performances, the four schools delivered a collaborative performance of A Word from A Friend, a song composed for this project by renowned Musical Directors, Greg Arrowsmith and Joe Bunker.

This has been a fun and challenging project that has given the students the opportunity to explore music as a means of telling a story. All four schools interpreted the brief in their own way, resulting in a thoroughly entertaining evening of music.

Peterborough Music Hub Manager Kirsten Goldthorp said “It is fantastic to see the young musicians of Peterborough working in such a collaborative and creative way. They have really risen to the challenge of working with professionals and have developed an immense wealth of skills and confidence in such a short time”

Matthew Moore, Head of Music at TDA, Added, “The project has been great. It’s brought students from different years and backgrounds together and the outcome has been some really interesting music.”