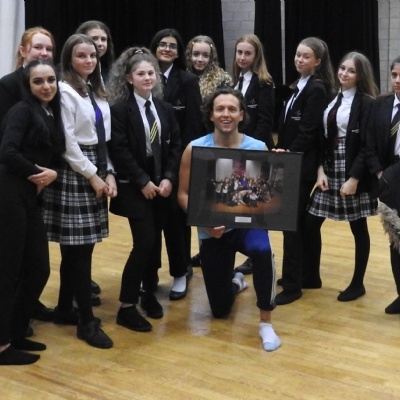 During his time at TDA, Glenn performed in the annual Academy musical where he discovered his love for being on stage, leading him to continue his studies at The Liverpool Institute for Performing Arts (LIPA) before starting his career as a dancer and actor.

Since graduating, Glenn has performed in a variety of stage shows, most recently playing the role of Theo in the hit London musical, American Idiot. Following a 9-month run in London, the show will go on an 8-week tour of New Zealand with Glenn continuing as a cast member.

We are very lucky that Glenn was able to squeeze in a visit to spend time with the current cohort of performing arts students, sharing his journey from education to career and mentoring them through a piece from the hit show American Idiot.

Glenn said, ‘It was great taking a walk down memory lane at TDA. It was there that I really discovered my passion for performing. I always valued how much pride and support they had for their annual musical and the Arts department. It’s great to see the enthusiasm for theatre is still very much at the core of the teaching there. There’s a lot of talent that comes out of Peterborough and it was great to see the next wave of theatre kids in action’.

There is no greater example of how great things can happen with hard work and determination, especially when you meet someone that has taken the same journey as you and is now living their dream.

Emily Jeffery, Subject Leader for Performing Arts added, 'It was an absolute pleasure having Glenn visit our school and work with our students. He was the ultimate professional and an amazing inspiration'.